A favorite side dish in my household is spaetzle, a dumpling that pays homage to my Swiss heritage.  I was first introduced to spaetzle when visiting my maternal grandparents in Switzerland and I was hooked.  Spaeztle is a cross between pasta and dumplings served with butter and fresh parsley… what’s not to like?  When David and I were newly married, he gave me a spaetzli maker (that looks like a metal cheese grater – and in fact a cheese grater or colander will do if you do not have a spaetzli maker on hand) for our first Christmas alone together.  It was a very thoughtful gift and one that has now survived nearly three decades of marriage, but I burst into tears when he gave it to me.  We had spent the morning volunteering in a women’s shelter and were returning to our rented house in Rockville to open presents.  I was already feeling homesick and we had not yet established traditions of our own for the holiday that was so meaningful to me but baffled my Jewish husband, since he knew it held no religious significance for me.  Christmas to me is all about the foods and decorations and traditions… and most definitely the presents.  David told me a very special gift was waiting for me (not under the tree since we didn’t have one that year, but ever since our house is adorned with both a menorah and a Christmas tree) and I am not sure what I was expecting but it was not a spaetzle maker.  All of my angst about our measly Christmas and my homesickness crystallized into that moment of opening what essentially looked like a mediocre cheese grater.  Poor David.

That then sparked its own tradition of making spaetzle for Christmas Eve dinner.  In 2018, I got to check off a bucket list item and perform on The Moth – this is the story I told about making spaetzle for Christmas Eve 2011, the year I was diagnosed with ovarian cancer and learned that I carry the BRCA-1 mutation.  My prophylactic double mastectomy was scheduled for mid-December.  I returned home from the hospital on December 22nd with strict instructions on what I could and could not do.  No driving.  No bathing.  No lifting.  We had an army of well-meaning friends and relatives who would happily have made our Christmas Eve dinner or had us over, but I really wanted to just hunker down and reclaim some of what we’d lost as a family over the past year.   And I wanted to cook.  I hadn’t been able to cook in ages, what with chemo and surgeries and mountains of rigatoni and tuna casserole to get through, and I was bound and determined to make Christmas Eve dinner for my family.  I love to cook and making things from scratch, sauces that simmer and dough that rises, is such a tangible way of expressing love and caring for my family.  Plus it just tastes good.  When I announced that I’d be making Christmas Eve dinner, David initially protested, but the good news about having major surgery or just cancer in general is that you tend to get your way.  (Our 20thwedding anniversary fell during the midst of chemo.  David had wanted to celebrate by using our Marriott points somewhere we could get to by car.  I wanted to go to Italy.  Guess who got to have gelato on Lake Cuomo a year later?)  So I played the cancer card and explained how important it was to me to be able to reclaim my role as nurturer and head of holiday cheer.  And I promised to be a model patient and delegate everything. Hannah and Eliza set the table while I had Noah do all of the heavy lifting.   He filled pots with water and carried them from the sink to the stove, took down the heavy frying pan, and put the roast in the oven. No lifting, no bending for me.  But the spaetzle, that was something I wanted to do. It felt so empowering and satisfying to have hands coated in flour and an apron tied around my waist.    I mixed the flour, salt and nutmeg – you can’t forget the nutmeg! – together and then added the beaten eggs and milk.   My hands got satisfyingly sticky as I combined the wet ingredients with the dry until I had a soft, pliable dough.   I then positioned the spaetlze grater over the pot of boiling water and kneaded the dough over it.  This is not a particularly taxing or difficult culinary task.  The dough is pretty pliable, and a lump the size of a small melon can yield quite a bit of spaetzle.   But it is a repetitive motion, back and forth with the dough as little bits of it escape through the grater and fall into the water.  When they rise to the surface, you pluck them out.  Now some folks might consider them done at this point, but those same folks would probably eat spaghetti without any kind of sauce or seasoning.  In our family, we’ve only just begun.  The boiled spaetzle is next fried in butter, so that there are little brown, crispy bits interspersed with the chewy ones.  You then sprinkle sea salt and chopped fresh parsley on top and you have yourselves one hell of a side dish.  And as my family sat around the table, eating the speatzle and our other platters of love and tradition, I felt so grateful to be there, to share in this holiday that had seemed like it was going to be snatched away from me not that long ago, and enjoy the fact that I was about to start the new year with all of my health woes behind me.   My sappiness about how we need to appreciate how lucky we are is often met with groans and protests, but on this night, we were all on the same page.  We easily could have had an empty chair at the table, and this fact made everything more delicious, every joke that was told funnier and story that was shared more poignant and we laughed and talked and fought over the last of the speatzle.  I was tired from the effort of making sure we had this meal together, but it was totally worth it, and it was nice to have an excuse to bow out of cleanup duty.  I was sore when I went to bed, my still-new stitches sending out little protests that grew in their intensity as the night progressed, but I figured I would wake up refreshed and I could recover from my burst of post-surgical activity.  I finally fell asleep, but the nagging thought that maybe I had crossed a line was starting to take hold.  The next morning, the protests had coalesced into a full on revolt.  I woke up with the certainty that something was wrong.  The night had not been restorative.  The night had made things worse.  I noticed with alarm that I had grown a third breast.  Well, not really… but it looked like that.  I was significantly inflamed and swollen, and my chest was in serious distress.  We were told to head to the emergency room, where I was asked to recount what had precipitated this post-surgical complication.  I explained about the spaetzle.  Mouths open in astonishment and dismay.  What was I thinking?  Had I not read the list of post-surgical prohibitions? But nowhere on there did it say no kneading, I explained feebly.

So here is how you make spaetzle… and hopefully it won’t land you in the emergency room!  I love it as a yummy side dish but you could also turn it into a main dish by treating it like pasta and serving a mushroom or meat ragout atop it.

Make a mound of 2 cups flour and 2 teaspoons salt and 1/4 teaspoon nutmeg in a large mixing bowl.  Whis together 1/3 cup milk and four eggs and pour them into the middle of the flour, then combine to make a soft pliable dough. 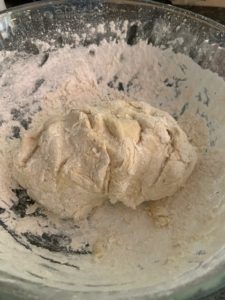 Position your Spaetzle maker over a pot of boiling water and slide it back and forth so the batter falls through the holes in little droplets. 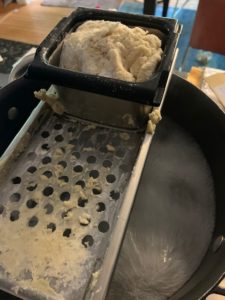 If using a cheese grater, you might want to make the tiny dumplings on a cutting board or plate and then dump them into the boiling water, since it would be hard to position the cheese grater above the boiling water.  Use half the batter, and when the dumplings rise to the top of the water, scoop them out with a slotted spoon and set them aside.  Repeat with the second batch of the batter.  (You can do this step ahead of time.) 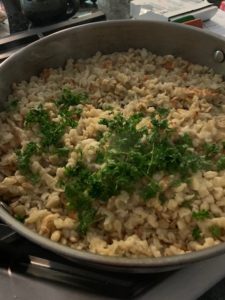 When ready to eat, melt some butter in a frying pan and transfer the boiled speatzle to the pan.  Saute until crispy and heated through.  Season with salt and pepper and freshly chopped parsley. 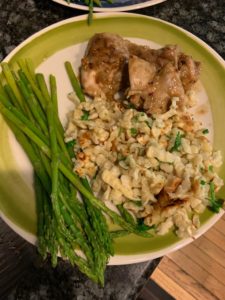 Leave a Reply to Your Mom Cancel reply