A friend of mine recently learned that she has breast cancer so I offered to bring her dinner.  Having been on the receiving end of many a meal during my own cancer journey, I now appreciate how that gesture is such an easy and tangible way to show someone you care about them and are trying to lighten their load in one of the few ways you can.  I can’t change the diagnosis or make the chemo and surgery that awaits you any easier or less scary, but dinner?  That I can do.  It goes back to food being one of my love languages.

When my friend emailed me back to say that would be lovely, she then disclosed (with the caveat that she would certainly understand if this made me less enthused to follow through on my kind offer) that some of her adult children had returned home during the pandemic and so the meal would have to be both kosher and vegan.  (She said I could make something for just her and her husband, whose palettes were far less complicated, and she could accommodate the others, but then what would be the point?  I wanted her to be able to relax and be a guest in her own kitchen for a night.)

Vegan cooking is a challenge to someone who has the Julia Child quote, “If you can’t use butter, use cream” in her kitchen.  But I know from being pleasantly surprised in restaurants sometimes, learning that something I thoroughly enjoyed was vegan, that good vegan food is within the realm of possibilities.  And luckily, making a meal vegan pretty much takes care of the kosher requirement – no meat means there will be no meat and dairy crossover.  Serve the food in disposable pans rather than your own dishes (something that I did not think through until it was almost too late) and you are good to go on the kosher front.

So here are two things I made for that meal that I think are worthy of repeating, even if you are not accommodating vegan and kosher palettes.  (I would also like to note that the thank you note I received for this meal made all of the effort I put into it feel more than appreciated and this is why I have always hounded my kids about writing thank you notes.  The writing of them appears to be becoming a lost art but I am stating now unequivocally that we should all make a concerted effort to not only write them, but keep the tradition alive.  And we can support the post office while we’re at it!)  But I digress…

This recipe comes from Bailey Rae in NYT Cooking.  Here is the description that sold me:”This is a great fall-themed veggie burger with acorn squash, dried cranberries, toasted pecans and oats. You have to bake the squash and caramelize the onions, but once those steps are out of the way, it’s an easy dish to put together.”

Preheat oven to 425 degrees Fahrenheit. Halve squash lengthwise, scoop out seeds and discard. Spray or lightly rub the insides of the squash with oil and season lightly with salt and pepper. Set squash halves, scooped sides down, on a parchment-lined, rimmed baking sheet. Bake for 25 to 35 minutes, until soft and skin is easily pierced with a fork.

Allow squash to cool slightly and then scoop flesh out from skin and into a fine mesh strainer. Gently press squash to squeeze out excess liquid and allow to drain for 30 minutes. Combine the ground flax seeds and water in a small bowl and allow to rest for 5 minutes to bloom. Reduce oven heat to 350 degrees.

Heat 3 tablespoons of olive oil over medium heat and add onions. Cook, stirring frequently, until golden brown and caramelized, about 20 to 25 minutes. Season with salt and freshly ground pepper. 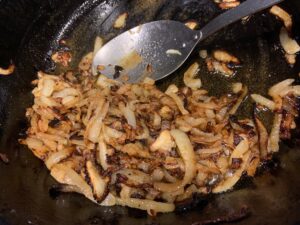 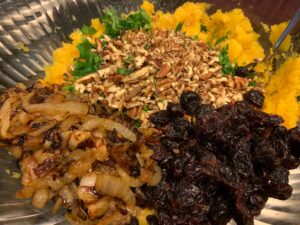 Drop onto a parchment lined baking sheet and cook for 20 minutes. Flip patties and continue to cook another 15 to 20 minutes, until firm to the touch and beginning to lightly brown.

This vegan green bean casserole, by Gena Hamshaw also from NYC Cooking, taught me once again that vegan does not necessarily translate to healthy!  I remember a vegan colleague of mine at Georgetown Law School used to have French fries and Fig Newtons for lunch and I couldn’t believe that a) both were vegan and b) they were consistent with her reasons for being vegan.  This recipe calls for fried onions (let’s be honest, the best part of any green bean casserole) and it turns out that these are – you guessed it! – vegan!

Heat the oven to 350 degrees and oil a 3-quart baking dish.

Fill a large pot with water. Add 1 tablespoon salt to the water and bring to a boil. Add the green beans and boil for 4 minutes (or 3 minutes if you are using French beans). Drain the green beans and rinse them under cold running water. Give them a shake to remove excess water, then cut them into 2-inch pieces. Transfer the cut green beans to the baking dish. 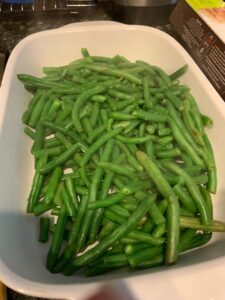 Heat the butter in a 12-inch skillet over medium heat. Add the mushrooms and shallots. Cook for 5 minutes, or until the mushrooms have released their juices and are reduced in size. 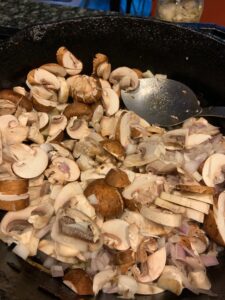 Stir frequently to prevent the shallots from burning. Add the garlic and cook the mushrooms for another 3 minutes, stirring as you go.

Place the flour in a small bowl and add 1/4 cup of the non-dairy milk. Whisk together to create a slurry.

Pour the remaining 1 3/4 cups non-dairy milk into the skillet with the mushrooms. Stir in the slurry, 2 teaspoons kosher salt and the black pepper. Bring the liquid to a simmer and reduce the heat to low. Cook, stirring occasionally, for 4 to 5 minutes, or until the sauce has thickened enough to coat the back of a spoon. 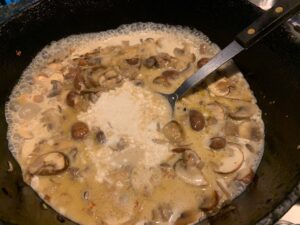 Pour the mushroom sauce over the green beans and give it a gentle stir to coat. Top with the fried onions. 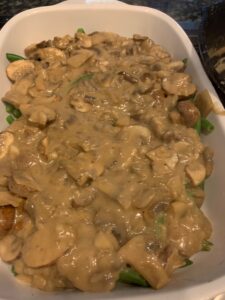 Cover the baking dish with foil and bake for 20 minutes. Remove the foil and bake for another 10 minutes, or until the onions turn a deep golden brown and the sauce is bubbling. Allow the casserole to cool for 15 minutes before serving. 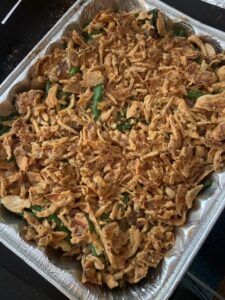