There are many things that would be challenging about being on Survivor (a show I have faithfully watched every season, even as family members peeled away and I was left to view it on my own while on the rowing machine), but eating rice is not one of them.  I love rice and often plan meals around it.  To be fair, the plain, white rice they have on Survivor is not particularly appealing to me, nor is having nothing but rice to eat day in and day out, but the fact remains that rice is a delicious vessel for all sorts of interesting flavors and additions for those of us who are not stranded on a remote island.

I recently discovered a new rice recipe while visiting my friends Juli and Willy (who made me the delicious ribs and potatoes featured in a recent blog).  They were raving about a cookbook called Cravings written by Chrissy Teigen.  I took a pic of a few of the recipes and recently tried this one at home, pairing it with some Ginger Lime chicken I found in the New York Times Cooking collection of recipes.  Yum and yum.  I packed some up to send home with a friend (who is working long, hard days as a doctor… let’s hear it for all those folks who are on the front lines of this pandemic!) and it freezes really well too,

I made extra rice thinking I would make rice pudding with the leftovers, since it could easily cross the line into dessert territory, but I ended up making a stirfry the next night with the leftovers so that little experiment will have to wait until the next time I make this coconut rice.  Which won’t be long because, as I said, it was yummy!

In a dry skillet, toast the coconut over medium-low heat, stirring, until lightly browned and fragrant, 4 to 5 minutes.  Transfer to a plate to cool (if you leave it in the skillet it might burn). 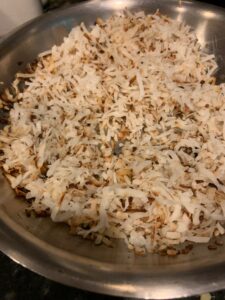 In a medium saucepan, combine the rice, coconut milk, 1 ¾ cups water (1 empty coconut milk can full), sugar, and salt and bring to a boil over high heat, stirring occasionally.  Reduce the heat to a barely bubbling simmer, cover, and simmer until the rice is cooked and the liquid is absorbed (there may be a bubbly layer of coconut cream on top of the cooked rice, so poke through it to make sure the rice is cooked), about 20 minutes. 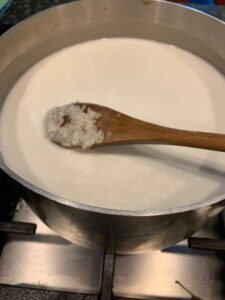 Remove from the heat and fluff with a fork, re-cover the saucepan, and let stand for 5 minutes.

Transfer to a serving bowl and top with the toasted coconut.

For the chicken, I knew only that I wanted to use the leftover ginger I had on hand.  I turned to my tried and true NYT Cooking website for inspiration and found this recipe for Ginger Lime Chicken.  It was incredibly easy and speedy, requiring minimal prep but you wouldn’t know that for all the flavor it packs.  And who knew mayonnaise could serve as such an easy and tasty adhesive for spices and flavors?  The mayo becomes unrecognizable when cooked and you are simply left with a moist and flavorful chicken that has retained all of the flavoring (in this case, ginger and lime) you added to it and has done double duty by preventing the spices from burning.  The NYT recommends experimenting with different combinations, like grated garlic, jalapeño, lemon, Parmesan and whatever else you can imagine. 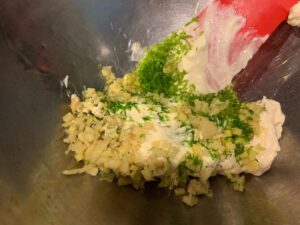 1 tablespoon lime zest (from about 2 limes), plus lime wedges, for serving

Pat the chicken dry and season all over with 1 1/2 teaspoons salt. In a medium bowl, stir together the mayonnaise, lime zest and ginger; season with salt and pepper. Add the chicken to the mayonnaise mixture and stir to coat. (The chicken can sit in the marinade for up to 8 hours in the fridge. Let come to room temperature before cooking.) 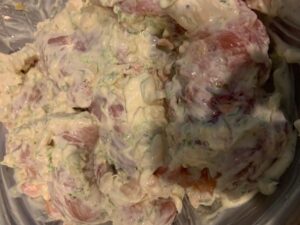 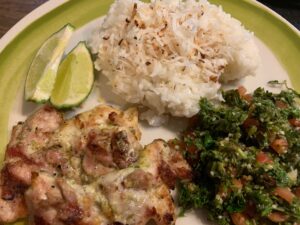 Serve chicken with lime wedges, for squeezing on top.

One Response to Blah Rice and Chicken?  Jazz It Up!