On Sundays, I like to make a big brunch and then have an early dinner.  And one of my favorite things about brunch – whether in my home or in a restaurant – is the ability to fill my plate with both sweet and savory.  I never want just one or the other, so David is usually very accommodating when we go out and we each order one from each category (such as a waffle and an omelet) and then we share.  At home, I can just make sure that yummy baked goods are on the table in addition to whatever eggs or savory dish I am serving.

Luckily, both girls sleep in so I have time to walk George, get in a workout on our rowing machine and wait for dough to rise all while the girls are still slumbering.  By the time they come downstairs at 9:30 or 10 (a time Hannah points out is not considered sleeping in for most households), something delicious is emerging from the oven, filling the house with the best “breakfast is ready” announcement there is.

Sometimes the timing just doesn’t work, which is why it is good to have a speedy Plan B baked good ready to come to the rescue.  I planned on making this Cinnamon Loaf that I saw in The New York Times recently, but with two rises and a rolling and construction in between, I would have had to push our brunch too late.  So I made some maple scones – that take about 30 minutes, including the baking time – and we ate the Cinnamon Loaf as a yummy afternoon snack to tide us over until dinner.  We also enjoyed it the next day for breakfast and I then made French toast with the remaining slices the following morning.

(Erin Jeanne McDowell in the NYT) 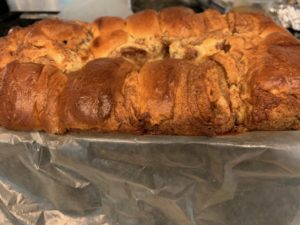 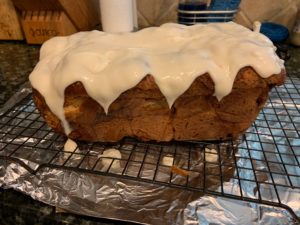 ¼ cup all purpose flour, plus more for rolling

Grease a 9-inch loaf pan with nonstick cooking spray and line with a parchment paper sling, leaving a 2-inch overhang on the long sides.

Pour the milk into a small pot and heat over low until it’s just warm to the touch (about 95 degrees). If needed, let cool to the correct temperature before using.

While the milk heats, in the bowl of an electric mixer fitted with the dough hook, mix the flour, granulated sugar, yeast and salt to combine. Add the warm milk, butter and egg and mix on low speed until the dough comes together, about 3 minutes. Scrape the bowl well, and mix on medium speed for another 3 minutes.

Transfer to a lightly greased medium bowl and cover with plastic wrap. Let rise until puffy and almost doubled in size, 45 minutes to 1 hou 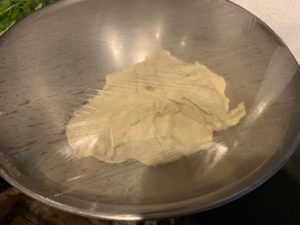 While the dough rises, make the filling: In a medium bowl, whisk the butter and brown sugar until well combined. Whisk in the flour, cinnamon, vanilla and salt until well incorporated. 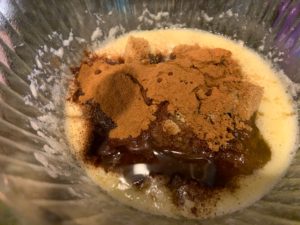 Spread the filling over the dough in an even layer all the way to the edges. Starting on one of the long sides, tightly roll up the dough crosswise into a 20-inch log. Gently stretch the log to make it about 24 inches long. 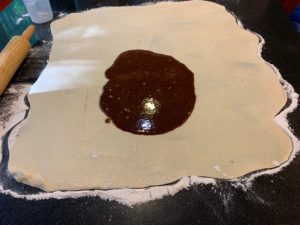 Use a sharp or serrated knife to cut the dough into 16 1 1/2-inch-thick pieces. 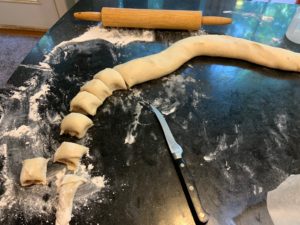 Arrange the cinnamon rolls in the loaf pan: Place two rows of six pieces each at the bottom of the pan, side-by-side, seam-side down and tightly packed with the swirls facing the ends of the pan. Arrange the remaining four pieces in the center on top of those on the bottom. 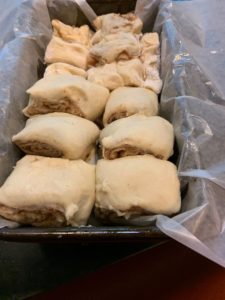 Loosely cover the loaf with plastic wrap and let rise until the dough comes about 1 inch over the top edge of the pan, about 1 hour (it can be more if your room temperature is cooler). Toward the end of the rise time, heat the oven to 350 degrees.

Make an egg wash by lightly beating 1 egg and 1 tablespoon water together. Brush the loaf with the egg wash, then bake until the loaf has an internal temperature of 200 degrees, about 50 to 55 minutes. The loaf will brown quickly; tent it with foil after 20 to 25 minutes for the remainder of baking time. 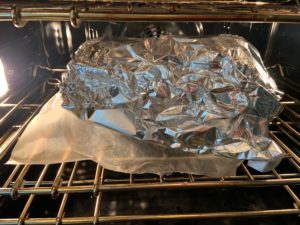 While the loaf bakes, make the glaze: In a medium bowl, whisk the confectioners’ sugar, cream and vanilla to combine. The mixture should be thick, more like a frosting than a glaze. Add more cream if needed to achieve a smooth texture. Cover with plastic wrap, pressing the wrap into the surface of the frosting so the surface doesn’t harden.