I like to experiment in the kitchen, but I like to do so within the parameters of a general sense that this has been done before and will taste good and won’t kill you.  I basically riff off of a recipe, adding my own twist or using it as a launching pad for whatever tweaks and innovations I want to add to make it my own.  If it turns out really well, we have ourselves a new recipe of sorts.  That is what happened with my chimichurri chicken meal.  I saw a recipe – I believe on the NYT Cooking website – but it used skinless and boneless chicken breasts and the chimichurri was not the kind I like to make.  But I liked the idea of using chimichurri as both a marinade for the chicken and as a sauce once it is cooked.  I mean, you really can’t have enough of all that herbal freshness, and the double whammy of it makes the chicken oh so tasty.

I used chicken thighs because I love eating chicken off the bone and I find thighs really moist and flavorful.  The fact that they also happen to be ridiculously inexpensive is just a nice bonus.  I also like the skin on because, let’s face it, its delicious, especially when you broil the chicken for the last minute or two of cooking and crisp it up.  This ended up being a great weeknight meal and the leftovers are perfect for chicken salad.

Make a chimichurri sauce.  There are many variations of this accompaniment to grilled or barbecued meats.  I use 3 cloves of garlic, 2 bunches of fresh cilantro, 1 bunch fresh mint, and 2 bunches fresh parsley. 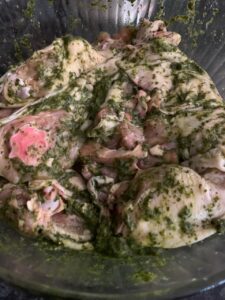 I put the herbs and the garlic in the Cuisinart and pulse until combined.  I then add some olive oil (1/2 cup) and red wine vinegar (2 tablespoons each), salt and pepper to taste, and some red pepper flakes.

Drain your chicken thighs (I used 3 lbs because I wanted leftovers) and season with salt and pepper.  Put them in a large Ziploc bag with ¾ of the marinade.  Squish them around to make sure the marinade is equally distributed and then refrigerate until ready to cook them.  If you are ready to eat within the hour, you can leave them at room temperature until you put them in the oven.

Preheat the oven to 350 degrees.  Grease a roasting pan and a rack (you can use a cookie rack if you don’t have a roasting one) and place the chicken on the rack in the pan.  Bake for 25-30 minutes and place under the broiler for the last 5 minutes or so. 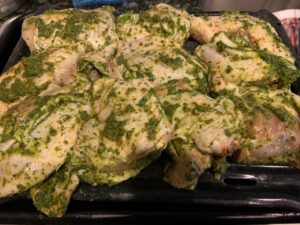 Reserve some of the grease that accumulates under the chicken in the pan (basically you now have herbed grease – let me tell you, that should be a new delicacy!) and pour it over your rice or potatoes or pasta or basically anything that is accompanying your chicken to make it ten times tastier. 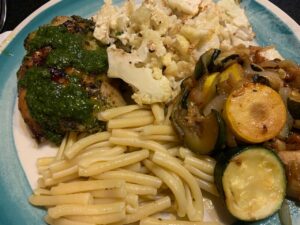