One of my favorite cooking magazines is the Food Network magazine because there are so many different chefs and cooking styles showcased in each issue.  Some recipes are very straightforward and others are more ambitious and all are accompanied by multiple photos, something I need to conceptualize a dish.  Cookbooks without illustrations might be chock full of phenomenal recipes but I am unlikely to get excited about them without a visual.

The Food Network magazine is chock full of colorful and enticing photos, often resulting in my trying a recipe that I might otherwise have not deemed worthy of trying.  That was definitely the case with Duff Goldman’s Chocolate Cream Pie, featured in this month’s Food Network Magazine.  It looked delicious and I thought it would be a fun treat to share with my neighbors … and of course David and I would enjoy a slice or two as well!  I bought what I anticipated were the ingredients – good quality chocolate, cream, whole milk, eggs – only to find, when I settled down to actually read and follow the recipe step by step, that Duff (whom I love as a judge on Spring Baking Championship) commits a couple of Katya faux pas.  First off, he used pudding mix.  Pudding mix?  Surely we can make our own pudding! And then – the greatest sin of all – he suggests covering the pie in Reddi Whip! What?  A renowned baker and discerning judge (“Did you use lemon extract rather than real lemon in this batter?”) is resorting to canned whipped cream?

So that is all to say that this recipe is his, but with a couple of Katya modifications.  I made his oreo crust and chocolate cream cheese layer, but I then made my own chocolate pudding to use as the next layer, covered that with chocolate whipped cream and then drizzled chocolate ganache on top.  I am sure folks would not complain either way, but it seemed criminal to me to take Duff’s shortcuts for a pie that has pudding and whipped cream as two of its star ingredients.

So here is his recipe: 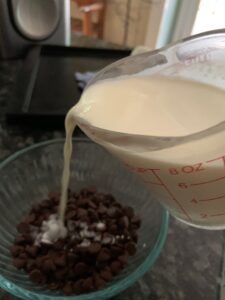 For the chocolate whipped cream:

4 ounces cream cheese, at room temperature (I omitted this)

1 cup whole milk (I omitted this)

Make the crust:  In the bowl of a food processor with a blade attachment, pulse the cookies until you get cookie crumbs.  Put the crumbs in a medium bowl, add the melted butter and toss with a fork to combine. 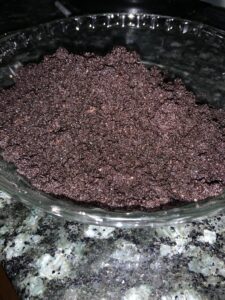 Press the cookies into a 9-inch pie pan and refrigerate for 30 minutes, or until you’re ready to use it, whichever comes second.

Make the ganache:  Put the chocolate chips in a medium bowl and set aside.  Pour the cream into a small saucepan and, over medium high heat, bring the cream to a boil.  Turn off the heat and pour the cream over the chocolate.  Cover the bowl with a kitchen towel and let it sit for 3 minutes.  Remove the towel and whisk the ganache until it is shiny.  Pour half of the ganache into the pie crust and spread evenly all the way up the sides.  Pour the rest of the ganache into a piping bag and set aside.  (I did not do this last step, but instead left it in the bowl and used a spoon to drizzle it on top of the pie.)

Make the chocolate whipped cream:  In a medium bowl, combine the powdered sugar, cocoa powder and whipped cream.  (Note:  I omitted the cream cheese from this component.  I figured there was already a cream cheese layer and I wanted the cream to be lighter to offset that layer.)  Using a whisk (or whisk attachment on your KitchenAid, the way I did), combine until medium stiff peaks form, making sure it does not get too stiff.  Place the whipped cream in the fridge until you’re ready to use it. 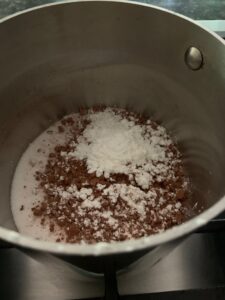 The recipe now calls for combining the pudding mix and milk and then adding half of the whipped cream mixture to the pudding mixture.  Instead, I just made straight up chocolate pudding, did not add whipped cream to it, and had that be its own layer.  Recipe below.  Refrigerate the pudding until ready to use.

Make the filling:  In a microwave-safe bowl with the microwave on high, heat the chocolate chips in 10-second increments, stirring each time, until they’re all melted.  Add the cream cheese and sugar and mix together. 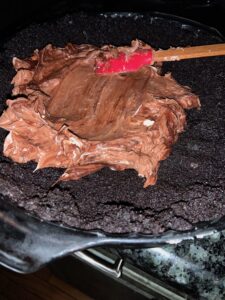 Finish the pie:  Take the pie crust from the refrigerator.  Using an offset metal spatula, spread the pie filling (chocolate pudding) evenly into the pie crust.  Return the pie crust and filling to the fridge for 15 minutes to set.  Take the filled pie crust and add a layer of pudding, then again refrigerate for 15 minutes.  Cover the filled pie with the chocolate whipped cream and garnish with the chocolate ganache and oreos.  (Do not, I repeat do not, spray canned whipped topping all over the pie as Duff suggests.  Duff, you let me down on that one but I still love you.)

And here is the Chocolate Pudding recipe I used (although I cut it in half since I didn’t need this much).

Chocolate Pudding (from Taste of home) 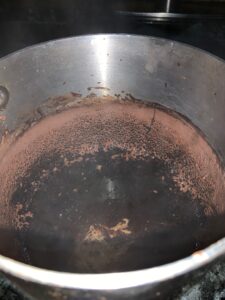 In a heavy saucepan, combine sugar, cocoa, cornstarch and salt.  Gradually add milk.  Bring to a boil over medium heat (not over high heat or it will burn and create a nasty mess on the bottom of your pan—not that I know anything about that!).  Boil and stir for 2 minutes.  Remove from the heat; stir in butter and vanilla.   Chill until serving.

As I am sure to anyone who looks at the ingredients and layers for this pie, it is very rich.  A little bit goes a long way. 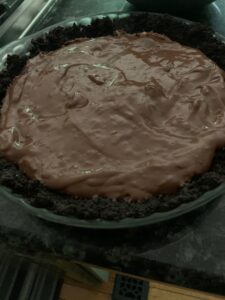