I think I have pretty good instincts in the kitchen and often my confidence will guide me to great new dishes and variations on recipes or things I have tasted elsewhere and want to recreate on my own.  But sometimes those same instincts, especially when I decide that I can go my own way or wing it without a recipe, result in big kitchen fails.  A few notable ones come to mind.  I was hosting a brunch many years ago and I decided to make the coffee cake that was on the cover of Bon Appetit that month.  It called for self-rising flour, something I didn’t have on hand, so I guesstimated what that would mean in terms of baking soda and baking powder.  My guesstimate was not accurate and the cake did not rise as it should have.  It would have been okay because it was still perfectly tasty except that my friend Lorrina (of the chocolate chip cookie delivery from last week’s post) also decided to make the cake and bring it to the brunch.  She faithfully followed the recipe and my cake looked like the miserable failure that it was when presented side by side with her correct rendering of the recipe.  Another time I decided to make churros as a last minute addition to a cast party I was hosting for one of Eliza’s shows.  I did not use a piping bag to shape the churro dough (something I now know helps compress them so that the air cannot escape) and I happily and oh so naively plopped them into the hot oil.  That is how I found myself dodging exploding churros and hot oil in a kitchen that became a danger zone minutes before everyone was due to arrive.

So I am sharing my latest kitchen fail for two reasons.  The first is to reassure all you home cooks out there who are perhaps venturing beyond your culinary comfort zones for the first time that failure is okay.  Failure is part of the equation and even seasoned cooks mess up, then retie our aprons and get back to it.  Even professional chefs make rookie mistakes, as seen on every cooking competition I have ever watched. The second reason for fessing up to my most recent culinary fail is to let you know that failures can still be tasty.  They may not look like what we envisioned or even taste as intended, but they can still be a hit.
That is what happened with these Toffee Cookies.  Hannah proclaimed them to be her favorite thing I have ever made… go figure!

I started by making the toffee from the Toffee doughnuts I will share in a forthcoming post. 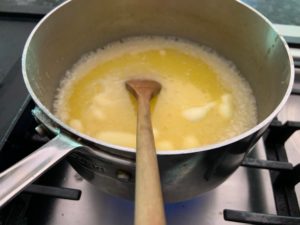 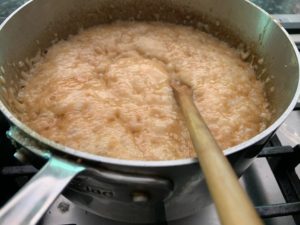 I chopped up half of it and added it to cookie dough (basically chocolate chip cookies without the chocolate chips) then ground the rest of it in a Cuisinart.  I shaped the cookies into balls and rolled them in the ground toffee, then refrigerated them. 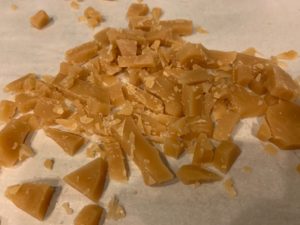 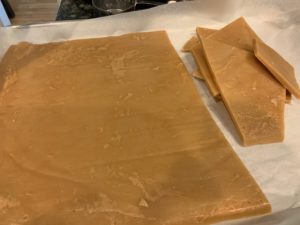 I envisioned thick, chewy crinkle cookies like gingersnaps.  What I got was a big, buttery mess.  The toffee essentially returned to its butter roots, the gloppy batter leaked onto the bottom of my oven, and the whole thing was a big disaster.

Except that it wasn’t.  Hannah and David love these buttery messes.  So they won’t be anything I willbe gifting to anyone or a recipe I will be recreating any time soon, but my efforts were not totally in vain. 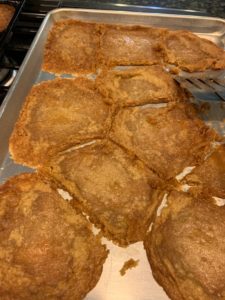 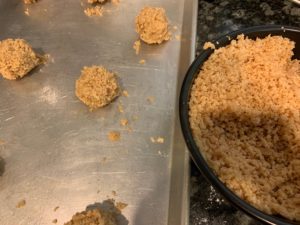