I have been making this soup for decades.  It is such a hit that it was a staple in the cooking classes I taught when we first moved to Charlotte 20 years ago, which then led to my having it in many homes for dinner parties!  (No worries because I love it and never tire of it.)  It is a great winter soup – warm and creamy and filling enough to be a meal in and of itself (coupled with salad and bread).  What makes it so delicious, aside from the fact that butternut squash is yummy in any incarnation, is the interplay of sweet and spicy. 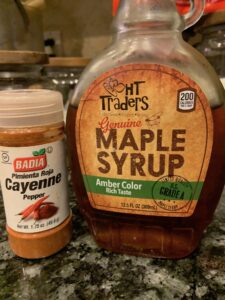 You sweeten it with maple syrup, but you offset that with cayenne pepper, and the two have a little party in every spoonful.

I always step it up a notch by adding banana bread or pumpkin bread croutons. In fact, the whole reason I made this soup the other night was because I had a loaf of pumpkin bread left over from Thanksgiving.  It wasn’t until I had already made the soup that I realized with dismay that I had sent the loaf of pumpkin bread back with Eliza.  So instead, I cut up some cinnamon bread I had 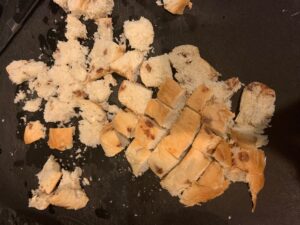 (most of the loaf was used for a delicious breakfast casserole we had on Saturday morning, with cranberries and apples and sausage) and made croutons out of that instead.  So good!  Or if you prefer, you can top the soup with some toasted pecans or – gasp! – nothing at al 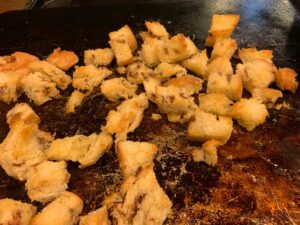 I also cheated this time and used cut up butternut squash rather than piercing an entire squash with a fork and roasting it the way the recipe calls for.  So know that this soup can be made with minimal fuss and pretty simple ingredients. 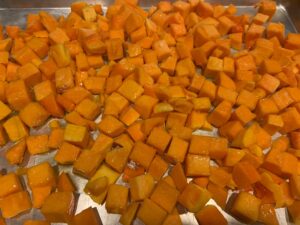 Oh, one last very important tweak.  The recipe comes from a cookbook called Cooking for a Crowd, so the quantities are massive.  I always do 1/3 the recipe… but go for it as is if you want to freeze the leftovers.

Preheat the oven to 350 degrees F.  Pierce the squash in several places with fork and bake until soft, 45 minutes to 1 hour.  Remove and let cool slightly, then cut in half, scoop out and discard the seeds and stringy membranes and scoop the squash into a bowl. 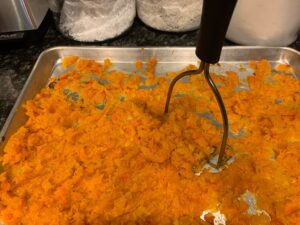 In a large flameproof casserole or heavy stockpot, melt the butter over moderately low heat.  Add the onions and cook, stirring occasionally, until golden brown, about 30 minutes.

Sprinkle the flour over the onions, increase the heat to moderate and cook, stirring, for about 2 minutes to make a roux.  Whisk in the milk and chicken broth.  Bring to a boil, stirring frequently.  Season with cayenne pepper and salt. 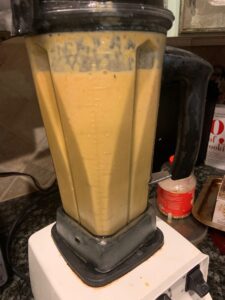 In batches in a blender or food processor, puree the baked squash with the soup base until smooth.  Return to the pot, add the cream and maple syrup and simmer for 10 minutes to blend the flavors.  Check the seasoning; if there is not a little bit to contrast with the slight sweetness of the squash and maple syrup, add more cayenne pepper to taste. 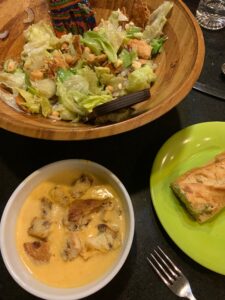 The soup can be made a day ahead and refrigerated, or weeks ahead and frozen.  Serve hot, garnished with a sprinkling of toasted pecans or banana bread croutons. 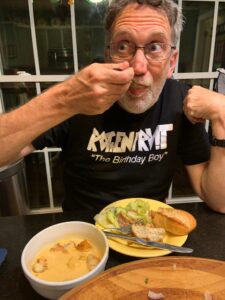