I first encountered Ooey Gooey bars at one of Eliza’s high school choir concerts.  They were by far the most popular item at the intermission bake sale.  A cookie base is topped with a gooey, buttery lid and the combined effect is exactly as described.  In fact, the recipe was circulated among booster parents as a suggested item to make for any gatherings or sales because they were such a popular and well-known treat.  The recipe calls for a cake mix, something that can yield a yummy treat (I certainly enjoyed those ooey gooey bars) but I find there is always a slightly chemical aftertaste.

So I was rifling through one of my favorite cookbooks the other day (thank you pandemic for giving me the time to reacquaint myself with my vast collection) and I found this recipe for gooey cinnamon squares.  They are everything I like about the bake sale ooey gooey bars but with the added yumminess of made from scratch with lots of butter.  As Deb Perelman, the goddess behind the Smitten Kitchen cookbooks, describes them, “This is what happens when snickerdoodles go to St. Louis [where she tasted her first ooey butter cake], meet some gooey butter cake, and have little buttery, squared children.”

As I was making them, I thought about my dad.  He was pretty disciplined about his diet but he also really enjoyed good food.  Sometimes he would remark on how delicious something was that I made for him and inquire what was in it.  “You don’t want to know,” I would tell him.  I knew it would ruin the experience for him to know just how much butter or cream went into the dish he was enjoying.  There is a reason it tastes so good!  These bars are the quintessence of tasting good because of what goes into them.  As you make them, you will realize that there is no way they can be anything but delicious… and I would have told my dad to enjoy them in blissful ignorance.

(from the Smitten Kitchen Cookbook) 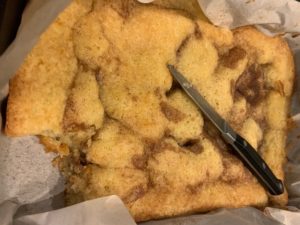 ¼ cup milk, half and half, or heavy cream

Preheat oven to 350 degrees.  Line the bottom of a 9×13 inch cake pan with at least 2-inch sides with parchment paper and either butter the paper and sides of the pan or coat them with a nonstick spray.  Set aside.

Whisk together the flour, cream of tartar, baking soda, and salt in a medium bowl.  In the bowl of an electric mixer, beat the 8 tablespoons of butter with sugar until light and fluffy.  Add the egg and the milk and beat until combined, scraping down bowl and then beating for 10 seconds more.  Beat in dry ingredients until just combined.

Dollop cookie base over the bottom of the prepared pan and spread it into an even layer with a butcher knife or offset spatula.  Set aside.

Whisk liquid sweetener, milk and vanilla together in a small bowl and set aside.  In the bowl of an electric mixer, cream the butter, sugar and salt until light and fluffy.  Beat in the egg, scrape down sides of bowl, and mix for 10 seconds more.  Add 1/3 of flour and mix, then ½ of vanilla mixture and mix.  Repeat again twice until all of the flour mixture has been mixed until just combined.  Dollop over the cookie base and spread carefully with an offset spatula or butcher knife.

Mix the sugar and cinnamon in a small bowl and sprinkle it over the gooey layer.  It will be thick but will come out of the oven almost like a crème brulee lid (i.e., awesomely).

To Bake and Serve:

Bake for 25 to 30 minutes until the cookies have browned on top.  The gooey layer will rise and fall in the oven but will still be a bit liquidy under the cinnamomn crust when the squares are done.  Let cool completely on a rack then cut into 1-inch squares.

The squares keep at room temperature for at least a week… but I cannot imagine them ever lasting that long!