There were many reasons to opt to drive Hannah back to New York City rather than put her on a plane. We were able to cram all of the stuff she had accumulated while living with us for four months rather than the two week hiatus she thought she was flying home for back in March.  We got to make Maryland our first pitstop and Hannah got another quick visit with her grandparents, plus she got to pick up an electric keyboard and amp.  (One of the pandemic positives for Hannah is that she rediscovered the piano and now she can continue to play in her Washington Heights apartment.)  And I was able to get in some quality time with Hannah and spend a few days getting her settled in the apartment she had only lived in for 2 days before flying to Charlotte to escape what turned out to be a pandemic hell for NYC.  (Ironically, it now appears to be one of the safer places to be in the country.  Citizens, merchants and civic leaders all saw firsthand what the virus can do and they now have the measures in place to never go back there.  It was a refreshing change from the lackluster approach I have seen in North Carolina and Georgia.)  And the trip allowed me to add a few pitstops, giving a talk on the Cape and visiting dear friends in Rhode Island and Virginia as I meandered my way home.

But let’s be honest.  It was great to road trip with my daughter (whom I will miss immensely) and reconnect with friends (it has been a loooong social draught for this extrovert) and it felt great to get back to patient advocacy (albeit with a mask on) but really what all of these miles behind the wheel provided was a chance to get some great food.  So many memories for me are linked to food and this trip was no exception.  I love looking forward to meals and delicacies unique to a region or place and we will often go pretty far out of our way to try something we have heard about or because we remember it from a past excursion.  Food matters.  It makes me happy at a time when happiness is not that easy to come by, and boy did it deliver.

I neglected to take food pics on this trip to Maryland but here I am enjoying my all-time favorite seafood delicacy – shoftshell crabs! – during last month’s trip. 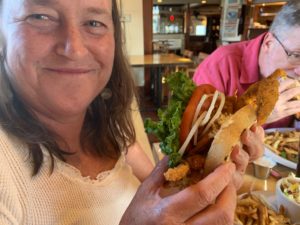 They are only in season for a short time each year and that renders them even more delicious because you know they are something you can only enjoy for a limited time.  I know the thought of eating the entire crab is off-putting for some, but I love the crunch and brininess and the fact that nothing tastes more like the sea to me.  Another highlight of our Annapolis excursions – also not pictured – are our visits to the Amish market.  We love their freshly baked apple and pistachio bread and the fruit smoothies that they make from the fruits you select right in front of you (mango, pineapple and peach was the winning combination this last time) but by far the biggest appeal of the Amish market is the pretzel breakfast log.  They take fresh pretzel dough, fill it with scrambled eggs, bacon and cheese, and bake it right in front of you.  There might be some melted butter happening too. Trust me, it is worth planning your trip around the few days of the week they are open… and yes, we did just that

As I snaked my way up the coast, I ate a lot of lobster.  I started with a lobster roll at a beautiful spot on the water that my friends Allison and Carter took me to as soon as I arrived at their home in Rhode Island. 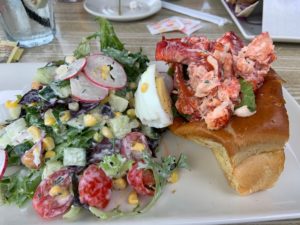 It was everything a lobster roll should be.  Huge chunks of fresh lobster meat, minimal mayo, a soft bun, and the bonus was the delicious salad that accompanied it.  Eating it while enjoying the spectacular view, feeling the warmth of the sun and knowing that I would soon be swimming in that water… well, it just doesn’t get any better than that.

That afternoon we stopped by a local store to pick up some stuff for dinner and I had to indulge in a Del’s frozen lemonade for nostalgia’s sake. 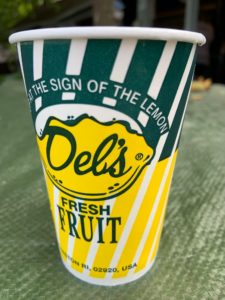 The Del’s lemonade truck would pull up on Brown’s campus in late spring and early fall and the line would form quickly.  When you are hot and have a walk across campus ahead of you, a cup of Del’s frozen lemonade is just the thing.  It took me back, which is what evocative food should do, and it was just as refreshing as I remembered.

The next morning we went out for breakfast and I was torn about what to get until – wait a minute! – there is such a thing as lobster eggs benedict?  Yes please!  And it was as delicious as it looks. 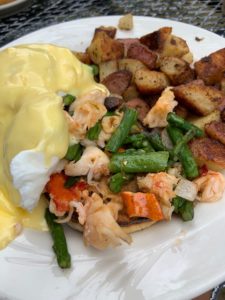 There were chunks of fresh asparagus, a creamy hollandaise sauce, and, once again, large chunks of fresh lobster.   It turns out you really can’t have too much lobster… and It is just as good for breakfast.

At the Cape, I took a brief hiatus from lobster and enjoyed a fried clam treat for lunch.  I had walked a bunch in a blazing sun for about an hour along the water in Hyannis, and I was thirsty, hungry and tired before finding the perfect clam shack along the water for lunch. 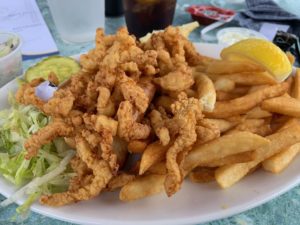 Sitting outside, listening to the (socially distant) chatter around me and indulging in a treat that I love in moderation (too much fried makes my tummy unhappy, but as an occasional indulgence it can’t be beat) I felt incredibly content and lucky.

For dinner, I decided to go for a trifecta of lobster.  I opted to have it with a wedge salad rather than in a roll. 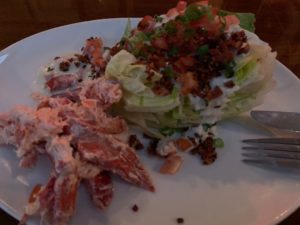 This really allowed the lobster to shine all on its own and shine it did.  When you can see where the lobster comes from as you are eating it imbues it with an extra layer of yumminess.  Thick Boston accents of those serving you and conversing around you on the restaurant’s deck are an added bonus.

On my way home I took a detour and stopped in Virginia Beach, Virginia to visit my friends Juli and Willy who used to live down our street.  We had many food traditions with them when we all lived a few houses apart.  They would host Christmas Eve dinner and make fondue and they would also host a March birthday dinner (David, Willy and I all have birthdays within a few days of each other in early March) that always featured ribs and crab legs.  So I was delighted that Willy announced he was making me his famous ribs when I visited. 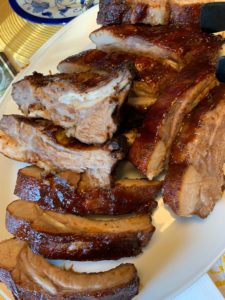 He also made delicious crispy potatoes with a lemon garlic sauce that were the perfect accompaniment.  I enjoyed a swim in their lovely pool with Juli while Willy made us dinner and we emerged, wet and hungry, to a feast that was rendered all the better because it brought back so many happy memories.

I hope you have been able to enjoy some food that lifts your spirits as well.  And now I am back home and ready to get back in the kitchen!  It was great to get away and get a break from cooking but I was gone just long enough to miss it.  And David is more than ready to have me save him from the frozen meals he was consuming while I was away.