This is the story of a kitchen fail. 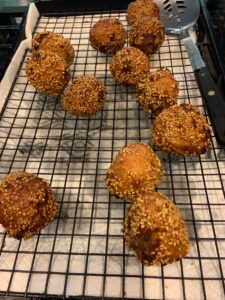 Twice.  I hate admitting that something has me beat, but sesame balls, you win.  I have rarely eaten something that I am unable to recreate at home, but that was before I tried making this treat that is my favorite item on any Chinese food buffet. I am raising the white flag and calling it quits with sesame balls. 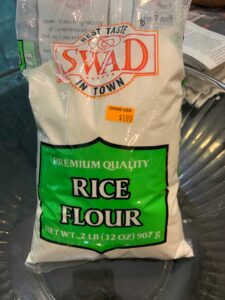 and again filling a pot with oil only to learn that the second attempt was only slightly more edible than the first… well, I think I am now good with paying someone else to make these treats.  Especially when they are substantially less expensive than the ingredients I purchased (twice!) to make them myself!

So if you by any chance want to make them, know that your rice flour must contain gluten – your dough will not work otherwise.  Know also that making the red bean paste from scratch -including soaking them overnight – hardly seems worth it when you can purchase prepared red bean paste that probably tastes a lot better.  Know also that your oil must be carefully monitored or your lovely balls – made correctly the second time around – will burn within nanoseconds.  And know that it is okay to admit that this thing has you beat… no one else in my family likes them anyway.

So instead of a pity party, I opted to use the remaining sesame seeds to make something far tastier, and that is the recipe I will be sharing with you now.  I made these really interesting peanut butter cookies that have a savory spin with the addition of sesame oil and sesame seeds.  The twist cuts the sweetness and has enough of the recognizable peanut butter cookie taste to make them yummy but renders them more intriguing and substantial than your run of the mill peanut butter confection.

I found this recipe in a People Magazine, of all places!  It is by the  Season 10 winner of The Great British Baking Show… and if you have not yet seen that show, you have many hours of delightful TV binging ahead of you!  All of the contestants are lovely and you will be so inspired and learn so much while rooting for absolutely everyone involved.  But I digress… 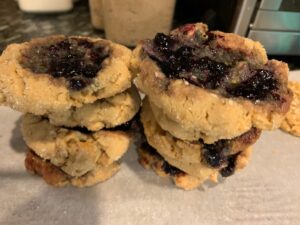 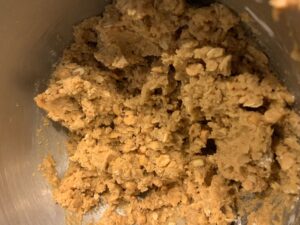 Line 2 large baking sheets with parchment paper. Spread sesame seeds on a plate. Scoop out heaping tablespoonfuls of cookie dough, and roll each into a ball. 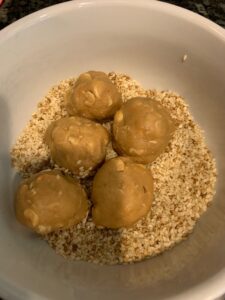 Roll balls in sesame seeds until evenly coated, and place 2 inches apart on baking sheets. (I ran out of sesame seeds – grrr! Wasted on the inedible sesame balls! – so the last batch of cookies I rolled in sugar instead and then made an indentation that I filled with blueberry jam.) 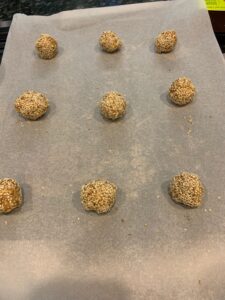 Bake in preheated oven until deep golden brown, about 15 minutes. 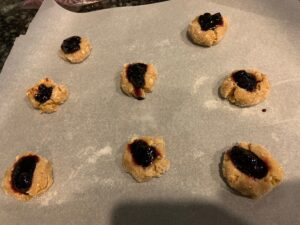