It is hard to find a small pork butt… which, by the way, is not the actual butt of the pig.  (I felt a lot better about enjoying this cut of meat once I learned that.)  So when I purchased one recently, I knew I’d be cutting it in half and making several meals out of it.  I used half for Sweet and Sour Pork, using a recipe that piqued my interest in a cookbook I bought for Hannah called something like Better Than Takeout (because the recipes are very straightforward and come with lots of photos, very helpful when you are learning to cook and need confirmation along the way that you are doing it right – I can’t check the exact title because it is already wrapped and under the tree) and I made pulled pork with the other half of the butt.  I rubbed it with the rub mixture when I cut it in half so that it could marinate overnight while I made the sweet and sour pork.  Both were very yummy and different enough that it felt like two entirely different meals, even though both were made from the same pork butt. 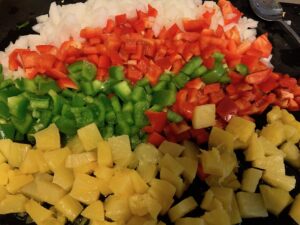 Combine the pork, ¼ cup of the soy sauce, the scallions, pepper and garlic in a large bowl.  Cover with plastic wrap and marinate in the refrigerator for at least 30 minutes or preferably up to 2 hours. 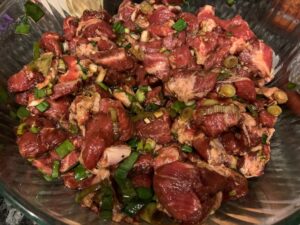 Fill a large saucepan with vegetable oil to a depth of 2 inches.  Attach a deep-fry thermometer to the side of the pan and heat the oil over medium-high heat to 350 degrees F. 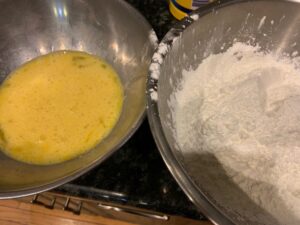 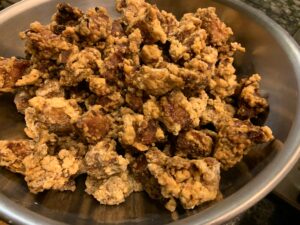 Add the coated pork to the hot oil and fry, stirring until crisp and golden brown, 3 to 4 minutes.  Using a slotted spoon or spider, transfer the pork to paper towels to dr

In a wok or large skillet, heat 2 tablespoons vegetable oil over medium high heat.  Add the onion and bell pepper and cook, stirring, until crisp tender, 6 to 8 minutes. 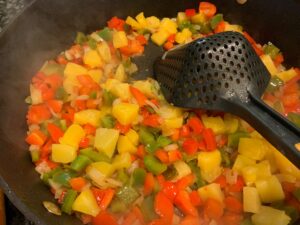 Stir in the pineapple, then add the remaining ¼ cup soy sauce, the vinegar, sugar and ketchup and cook, stirring continuously, until the sauce thickens, about 5 minutes.

Return the pork to the pan and toss to coat evenly with the sauce. 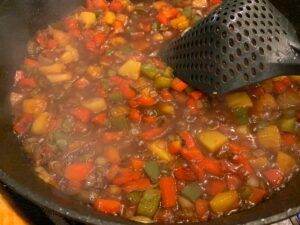 Remove the pan from the heat and sprinkle the pork with the additional sliced scallions.  Serve the pork hot with rice.  (Or if you just had rice the night before with your leftover chicken, then serve it with Asian noodles!) 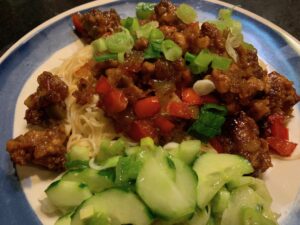 We celebrated each of our kids’ Bar and Bat Mitzvahs at our house with backyard barbecues.  No fancy shindigs with DJs for us.  I did all the catering, which meant I had to plan menus that I could do in advance or could cook while we were at services, then rush home to lay it all out before everyone showed up.  For Noah’s, I actually served pulled pork, an irreverent choice for a Jewish celebration but a great way to feed a lot of people while also providing a nod to the South.   We worried pork would offend some of the older Jewish relatives, but when they came in for second and sometimes third helpings, we knew we were okay!

Roasting a pork butt is incredibly easy to do.  I prefer to do it in the oven rather than a slow cooker because I like the crispy exterior that you cannot get in a slow cooker.  While it is cooking, you will have plenty of time to make the buns, sauce and coleslaw that are a must to accompany it for the best pulled pork sandwiches ever.  I have tried a variety of recipes over the years but I think I have settled on these, from Leite’s Culinaria, as the winners. 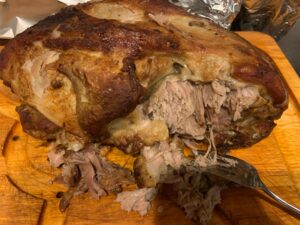 In a small bowl, stir together the salt, sugar, paprika, pepper flakes, cumin, and black pepper.

Rub the pork butt all over with the spice mixture. The pork butt should be completely coated on all sides. If you have time, tightly wrap the pork in plastic wrap, place it in on a rimmed plate or container of some sort, and refrigerate overnight to let the flavors mingle.

Heat your oven to 250°F (121°C). Place a wire rack in a roasting pan. Place your pork butt, fatty side up, on the rack. Roast the pork, uncovered, until the exterior of the pork butt is crisp and dry—this is what’s referred to as “bark” in smoking circles. This will most likely take 4 to 8 hours, depending on your oven and the size of your pork butt. If you don’t let the bark fully develop, the finished pork will be soft and a touch soggy on the outside rather than crisp.

Carefully wrap the pork butt in a couple layers heavy-duty aluminum foil and return it to the wire rack in the roasting pan. Continue to roast until the pork reaches an internal temperature of at least 190°F (88°C) and preferably 200°F (93°C). This recipe is almost impossible to pull off without a meat thermometer. You really can’t judge the pork by sight or feel. A thermometer is the only way to know. Personally, we prefer a digital probe thermometer that can be left in the pork as it roasts or grills. When you insert the thermometer, stick it into the thickest part of the pork butt, and be sure not to have it next to any bone or you’ll get a false reading.) Remove the pan from the oven and let it rest for 30 to 45 minutes before carefully unwrapping the foil.

Shred the pork with a couple forks, making certain to evenly mix the crisp, dry edges with the insanely moist, tender pork within. You’re probably going to want to douse the pulled pork with some barbecue sauce to impart some flavor and sauciness. Use the pulled pork in sandwiches or store it for use in other recipes or just stand there at the counter and nosh on it. (The pulled pork will store well in the fridge for 7 days. If you’re freezing it for later, divvy it into 1-pound servings and freeze it in storage bags.)

In a small bowl or jar with a lid, stir together the vinegar, tomato paste or ketchup, brown sugar, lemon juice, salt, 1/2 teaspoon cayenne pepper, and cracked black pepper. Cover and chill at least 1 hour or, preferably, overnight before using.  Taste and adjust the seasoning, adding additional cayenne pepper if desired. Slather it on everything in sight.

3 tablespoons butter, melted, plus more for the baking sheet

Mix and knead all of the dough ingredients except for the melted butter by hand, mixer, or bread machine until a soft, smooth dough forms.

Cover the dough and let it rise for 1 to 2 hours, or until it’s nearly doubled in bulk.

Gently deflate the dough and divide it into 12 pieces.

Shape each piece into a round ball, then flatten it to a squat round blob about 2 1/2 inches across. (Another easy way to shape buns, besides rolling them into balls and flattening, is to gently deflate the dough and form it into a smooth 8-inch log. Using a serrated knife, slice the log into 12 pieces.

Gently tug the edges of each piece underneath the ball of dough to form a squat ball.)

Place the buns on a lightly buttered or parchment-lined baking sheet, cover, and let rise for about an hour, until noticeably puffy.

Brush the buns with about half the melted butter and bake until golden, 12 to 18 minutes.

As soon as you remove the buns from the oven, brush them with the remaining melted butter, which will lend the buns a satiny, buttery crust. Place the buns on a wire rack to cool completely. 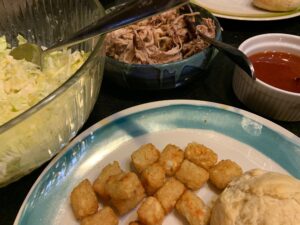 Combine the onion and 1/4 cup sugar in a large bowl and let sit for 30 minutes.

Add the oil, mayonnaise, vinegar, salt, and pepper to the onion and sugar and stir well to combine. Taste and, if desired, add some or all of the remaining 1/4 cup sugar and stir until it dissolves. Cover and refrigerate until ready to use.

About 15 to 30 minutes before serving, add the cabbage to the dressing and toss well. Refrigerate the coleslaw until serving time.